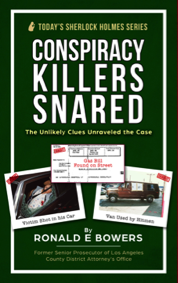 The media likes to belittle detectives. They will disparagingly refer to them as gumshoes. Somehow the media likes to make detectives resemble Sgt. Colombo, if not in his appearance at least in his disorganized approach of solving crimes. Yet, this generalization of detectives is far off target. In my 43 years’ experience as a prosecutor, I have had the opportunity to work shoulder to shoulder with many detectives. True there are some lazy ones who are going through the motions merely waiting for their retirement. However, I have been impressed with so many sleuths who understand human nature so well that they can predict where to search for clues where I would never think to look.

This book examines the LAPD North Hollywood Division Detective Bureau on one specific homicide. This case hardly received any media attention since it was a shooting of a non-descript man in a blue-collar part of town. If LAPD didn’t solve this case no one would have complained and certainly there wouldn’t have been any rights groups protesting.

What was remarkable about this case was the manner in which the patrol and detective units of LAPD went about their job. The first patrol officer on the crime scene recognized that there had been a shooting on a residential street. His immediate concern was the motionless man seated in the driver’s seat. After checking out the victim he inferred he had a homicide that would require the attention of the LAPD detectives.

Within an hour the homicide detectives were on the crime scene. As in most homicides, there was no suspect waiting to turn himself into the police. What amazes me the most about these detectives and the CSI techs is how they know where to start and what to do. It is like a football game. The offense team is on the field and all the players huddle to decide what they are about to do. Here the detectives and CSI staff talk and the lead detectives explains the game plan. Then all the players (detectives and staff) leave the huddle and go to their assigned positions.

When the ball is snapped ever player attempts to do what he has been assigned to do. However, like in every football play nothing goes as planned and everyone has to improvise. This is were the magic comes into play. Each player or in our case each detective has to decide how to confront the new situation they are faced with.

Not to give away the remarkable story of this book, the detectives had to make some deviation to their planned investigation in order to unravel this complex conspiracy of five individuals. The detectives had to flush out witnesses who knew something crucial even though they couldn’t identify any of the suspects.

Also, one of the key pieces of evidence was a piece of trash which one of the officers was smart enough to pick up and show to the detectives. Most people would consider checking out trash would be a waste of time. The detectives exhibited incredible patients and used astute interrogation techniques to extract the truth as to what really happened. In this case the CONSPIRACY KILLERS WERE SNARED by some superb detective work that will amaze you.