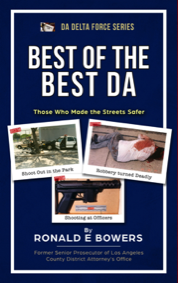 BEST OF THE BEST DA

This True Crime book will answer many of those questions. The author has selected two amazing prosecutors who are considered the Best of the Best. You the reader will get to walk in their shoes through the theinvestigative phases as well as the trial stages of four intriguing homicide cases.
In the first case, the reader is introduced to one of the most unusual prosecutors of all times. His name is Tony Manzellawho has worn both hats as a prosecutor when he started out and later went on to be one of the top Defense attorneys. When he retired from his law firm, he wanted to return to his first love which was prosecuting the deadliest, hardcore gangbangers. You the reader will have the opportunity to follow Tony through two trials in which he takes on the Mexican Mafia and ultimately cripples them from causing mayhem and spreading havoc in the barrios.
The first trial reveals the dark side of drug dealing where you learn it isn’t wise not to pay your 10% sales taxes to the Mexican Mafia. The consequences of not paying can lead to a horrific death. You will follow Tony the prosecutor in his quest to find witnesses willing to testify against the members of the Mexican Mafia. When no witnesses are forthcoming, he finds a way to turn the deadly Green Light list against the Mafia.
Then you the reader will be introduced to another remarkable prosecutor by the name of HoonChun who took on the Monster of Atwater. This Hispanic gangster’s real name was Timothy McGhee who one might imagine to be a choir boy. This gangster was so proficient in killing off potential witnesses that he was considered the ‘Teflon Man.’ However, prosecutor, HoonChun, was able to meticulously build a solid case against this prolific killer by using his girlfriend he had met at the ‘Loser’s Lounge’ in Bullhead City. She was able to authenticate a notebook by the killer which contained ‘gangster rap lyrics’ describing how he killed his victims.
This book gives you the reader the chance to go behind the scenes to see how the WORST OF THE WORST KILLERS were brought to Justice by the BEST OF THE BEST DAs.