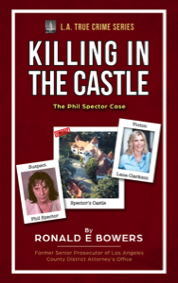 KILLING IN THE CASTLE

If you are fascinated by CELEBRITY life style you will learn how the rich and famous live in their little castles. Phil Spector was a record producer who created the ‘Wall of Sound’ which brought us music we have etched in our memory. He created the sounds for the Crystals (Uptown, He’s a Rebel), the Ronettes (Be My Baby), the Righteous Brothers (You’ve Lost that Lovin’ Feelin, Unchained Melody), Ike & Tina Turner (River Deep, Mountain High), and of course the Beatles (Let It Be).

If you are enthralled by SALACIOUS FACTS you will find them sprinkled throughout. The facts of the case are that Spector met Lana Clarkson an actress, who played the Barbarian Queen before working at the House of Blues. He invited her over to his castle for a drink where just the two of them spent hours listening to his music, drinking and indulging in some heavy fondling. When she tired, she went to the foyer and sat down. Shortly thereafter she ended up shot in the mouth with the bullet severing her spinal cord killing her instantly.

If you are mesmerized by COURTROOM DRAMA you’ll find this book epitomizes the battle of legal wits.  Spector had a Dream Team of Attorneys that even O. J. Simpson would envy.  This pitted the best attorneys on both sides. It was like a high stake chess match.  The DA knew that if they could get Spector to take the witness stand he would convict himself.  The DA therefore didn’t use any of the statements Spector made to the police. In this way Spector would have to take the witness stand to get his story before the jury.

If you are captivated by FORENSICS you will enjoy the endless supply of science.  The Defense spared no expense in collecting the best known forensics experts to prove that Spector couldn’t have shot the victim.  If you want to learn more about DNA or Blood Spatter this book will make you a full fledge CSI techie. The Defense persistently tried to show that Spector didn’t have enough blood on his jacket to be the shooter.

If you are captivated by INTRIGUE you will find it in the middle of the trial when a bombshell dubbed ‘the missing fingernail’ blew up the career of the best known forensic expert, Dr. Henry Lee.  A Defense law clerk revealed that certain evidence was discovered in the castle, the night after the shooting.  A former Defense attorney claimed that she saw Dr. Henry Lee pick up a piece of evidence that appeared to be a fingernail.  She claimed Dr. Lee saved it by placing it in an evidence envelope. When Dr. Henry Lee was called to the witness stand he denied finding or collecting anything. The judge later ruled Henry Lee was a liar.