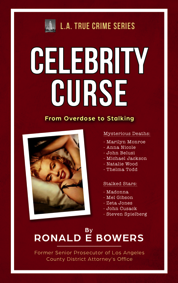 We are familiar with headlines exclaiming that some CELEBRITY  has been involved in an overdose situation. This book examines why there has been so many drug overdoses by people who seem to have made the big time. Why are the most famous people who have it all the most vulnerable to dependency on drugs? The purpose of this book is to inform the public that there is a high price one has to pay if one wants to live the Celebrity life style. That is where the title CELEBRITY CURSE evolves from. Unfortunately the Celebrity life has its ‘downers’ from drugs and the constant loss of privacy due to staking by obsessed fans. This book uses criminal cases to illustrate how Celebrities become victims through enablers and malicious stalkers.

MARILYN MONROE The coroner found Chloral Hydride in her body. Was her death an accidental overdose, planned suicide or an out right MURDER?

ANNA NICOLE SMITH She was thought to be the new Marilyn Monroe. The coroner found Chloral Hydride in her body. Where the doctor responsible for prescribing the drugs that eventually killed her?

MICHAEL JACKSON Who was responsible for his death? Was it the concert promoters who paid $!50,000 a month to a doctor to medicate Michael? Or was it the negligence of the doctor who gave him Propofol to sleep?

JOHN BELUSHI What drove him to give it all up to get high on Speedballs?

NATALIE WOOD How could she drown when on her private yacht with her husband and her leading man?

THELMA TODD How did this early movie star end up dead in her car parked in her boyfriend’s wife’s garage?

MADONNA What do you do when a stalker threatens to cut Madonna’s throat  from ear to ear?

MEL GIBSON How do you persuade a stalker to leave the star alone who only wants to pray with him?

CATHERINE ZETA JONES with her husband MICHAEL DOUGLAS Both are stalked by a woman who wants to kill Zeta Jones while having an affair with Michael. How do you stop her when stars have to attend events?

JOHN CUSACK Learn how a restraining order against a stalker only made her madder and more violent..

STEVEN SPIELBERG His stalker made elaborate plans to kidnap Spielberg while he was making Private Ryan.