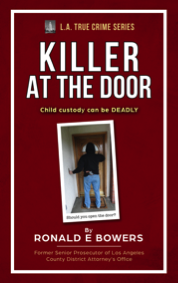 KILLER AT THE DOOR

Imagine your doorbell rang when you weren’t expecting visitors. Out of concern you don’t want to open the door but the doorbell continued to chime. From inside the door you asked, “Who is it?” Then the voice from outside says, “Is this your car in the driveway?”  Should you open the door slightly to check on your car? Out of anxiety you opened the door a crack and looked out to see who the visitor was..

In this case it was a serious mistake as the intruder began his attempt to execute the resident by pulling a gun and shooting him at point blank range.  One of the bullets tore through his eyeball and exited the other side of his head. Why would any person want to execute a Hollywood stunt man? What type of person was so intent on killing an innocent person?

This book explores the motive of the killer and how who went about hiring a hit man to do the job.  You will learn about the difficulties in finding a reliable hit man you can thoroughly trust. How do you arrange payment to a hit man, part, as a down payment and the rest upon completion of the job?  When negotiating with a hit man do you request a guarantee that the killing will be done according to plan?  If the hit man got lost on the way to the hit, do you get your money back?

Then narcotics officers in a distant police department, found the victim’s address and photo under a spare tire in the trunk of a drug dealer’s car.  That information percolates to the homicide detectives who concentrate on how this low level drug dealer could be a possible shooter. Eventually, the drug dealer finds himself charged by the DA with the shooting.

During the preliminary hearing the defense attorney introduced evidence that the drug dealer had an iron clad alibi.  The judge listened to the evidence from both sides and, at the end of the hearing, said he would hold the defendant over for trial.  However, the judge advised the prosecutor to check out the defense attorney’s evidence since it seemed highly credible. The judge said if he were trying this case he would find a reasonable doubt as to defendant’s guilt.

To the chagrin of the DA’s Office, they were prosecuting the wrong person for the shooting of the stunt man.  In a strange alliance the prosecutor and defense attorney joined together to exonerate the drug dealer and try to develop evidence against the true perpetrators.  You will learn the difficulties of obtaining evidence against the true hit man.  How do you get a hit man to make incriminating statements when he doesn’t want to talk about his hits?

The ultimate problem was how to make a case against the mastermind of the shooting? That person in the center of it all was untouchable.  We have always been told that ‘blood is thicker than water’ but after reading this book you will learn there are exceptions to that old adage.   This book will enlighten you as to sibling attachment and loyalty for each other.