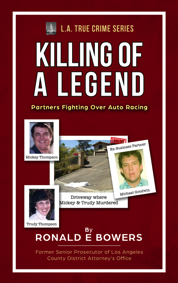 KILLING OF A LEGEND

Too many, Mickey Thompson was a true Legend partly because he won over 500 speed and endurance records in auto racing. To others they knew him as a promoter of Stadium Racing events held all over the country.  Some might be more familiar with his high performance auto parts line which included the famous Mickey Thompson all terrain tires. His name was synonymous with being the fastest man on wheels when he set the speed record of 406.6 mph in 1960.  No matter how the public came to know him he was successful at everything he did and certainly became a True Legend.

On March 16, 1988, he and his wife were executed in their driveway for no apparent reason by two young men who afterwards escaped on bicycles. The nation was shocked at the cold-blooded manner in which the shootings occurred. Eyewitnesses described the shooters as two young males with large backpacks riding bikes through the gated community of Bradbury and the media toyed with the possibility that it might be the result of a business dispute.  Names were mentioned, one of which was of a former business partner.  However, he had a solid alibi as he was at a Costa Mesa gym with dozens of character witnesses.

Years went by with no arrests and detectives had no concrete evidence. Mickey’s sister, Colleen Campbell, wouldn’t take no for an answer and continually prodded the Sheriff’s Department to look at any and all leads. She put up a million dollar reward and hired private investigators to follow up on every clue. She encouraged various TV series such as Unsolved Mysteries; 48 Hours; and America’s Most Wanted to rerun the re-enactments in hopes that some witness would come forth with something new. After 13 years had passed a person called one of the TV stations stating that he was a friend of a friend who thought he saw something that could be important regarding the shootings.

The Sheriff’s Department assigned a new Cold Case detective to the case.  He was considered a Hot Dog detective who seemed to have a sixth sense when investigating homicides. Since he had zero clues coming in, out of desperation he contacted the TV station to see what this friend of a friend knew about the case. After several phone calls, he determined that a couple had seen a man in Bradbury who looked suspicious sitting in a car scoping out the area. This sighting wasn’t on the day of the shooting but two days before the murders.  The eager detective asked the man if he thought he could identify the person in the car and he replied “maybe.”  The detective showed him six large photos and this witness picked out the photo of Mickey’s ex-business partner as the person he saw in the area two days before the shootings.

This began a long legal process of trying to build a case against this ex-partner who appeared to have committed the perfect crime.  This book gives you a look behind the scenes how the case was prepared and presented including the scintillating courtroom drama that even a novelist couldn’t have dreamt up.  It took 18 years for justice to be served in the KILLING OF A LEGEND.