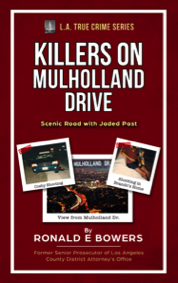 .This book starts from the west side of Mulholland Drive at the 605 Freeway where Ennis Cosby was innocently changing a flat tire when he was shot to death during an attempted robbery. It was a tragic since Ennis had such a bright future and he wanted to give back to the community as a teacher. Ennis’ killer almost got away with murder which would have been a travesty of justice. The prosecution’s key witnesses were terrified of testifying against the killer since they thought they would be harmed by the killer’s fellow gang members.  Because of the clever actions by the detectives and a highly skilled prosecutor, justice was served in the most unusual way.

After reviewing the Cosby case, we travel down the Highway of the Home of the Stars and stop to visit Marlon Brando’s estate.  There we review the facts of the killing of the boyfriend of Marlon Bando’s daughter, Cheyene by Marlon’s son Christian. Few people were ever privy to the reasons why Christian Brando plead guilty and ended up sentenced to six years in state prison.  This book reveals the inside drama that the Brando members experienced and where they are today.

Next door to Marlon’s home is the bachelor pad of Jack Nicholson which played center stage to the longest fugitive case in LA’s history. Although this case wasn’t a homicide it is the case one has to address when discussing Mulholland Drive.  Roman Polanski back in 1977, arranged to do a photo shoot at Jack’s place with a 13 year old girl. Most of the world knows Polanski sexually molested this young girl.  However, what most people want to know is why has the strongest nation been unable to extradite a person who they know where he is but still can’t bring him back to finish the sentencing? Since I was in charge of the DA’s Extradition Unit, I can give you some insight as to what really happened. You will find it very perplexing and come away thinking it is like a giant chess match with no winners.

As the sunsets, Mulholland Drive is transformed into a Lover’s Lane.  Its panoramic views of the City of Angels attract young couples who are seeking a little privacy. At the same time, criminals recognize the great opportunity to rob these young couples when they are all alone.  Finally, my last murder case tells a story about incredible bravery and resourcefulness of a young woman.  Faced with death, she used her ‘Woman’s Instinct’ to figure out a way to survive. Her story adds to the mystic of Mulholland Drive.

It’s amazing how this one road has so many mesmerizing stories to tell. This book reveals another side of MULHOLLAND DRIVE you never knew about but if you read this book you will always remember.