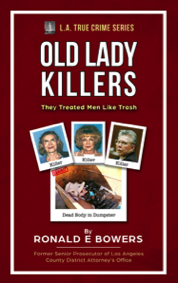 This book will forever change the way you look at grandmother types.  We take a look at three elderly ladies. (when you finish the book, you might not still think of them as being ‘LADIES.’)  The first two ladies were so diabolical that they had no hesitancy selecting victims and wait two years while working with them, before killing them.  This process was called ‘Fatting Up the Turkey’ before the final slaughter.  How can a human being interact with someone, for that long, who they know they will kill in a horrific manner? What makes these murderers so despicable was the fact that they picked the most vulnerable people in our society to be their victims.

This book provides the reader with insight how these crimes were committed.  Next you take on the role of Detective Colombo (Peter Faulk) and go behind the scenes to see how these septuagenarian ladies were caught.  They never claimed that life was cheap.  They saw the lives of the victims to be worth millions.  Then the story is completed by the highly charged courtroom drama that saw one of the most bizarre Defenses to be presented to a jury.

Upon finishing the story of the two little old ladies case, this book proceeds to review the ‘Most Evil Woman’ as described by a female judge who ended up sentencing her to Life in prison.  This elderly lady spread her trail of murder all across the nation. She was the master of manipulating people including her husband and ultimately her son. She taught her youngest son how to defraud others without getting caught.  Some labeled the mother son team the new ‘Bonny and Clyde’ but they were far more devious and sinister.

This book reviews their crime wave and provides insight how their luck ran out as they tried to carry out one of the boldest frauds in history.   They believed the more audacious the rip off the higher the odds of success.   She didn’t enjoy doing the dirty work and she would leave the manner of killing up to her faithful son. After reading the book you will understand why this elderly lady never was nominated for the award of ‘Mother of the Year.’ This elderly lady learned early in life that she didn’t like being sent to prison so she made sure that there were no witnesses who could testify against her. Her philosophy was ‘No Witnesses No Crime.’

You might say to yourself that you have heard about these ladies from articles you have previously read.  However, this book provides you with a look behind the scenes as to how the detectives were able to snare these ladies before they set their sights on killing other helpless victims.  When you complete the book you will understand why these ladies were called the “The Black Widows.”