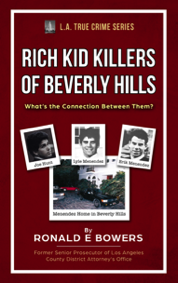 If you are the type of reader who likes to examine the facts from the inside out, you will find this book captivating. The author reviews two prominent murder cases you will be familiar with from the 1990’s in which he was extensively involved in and he shares his personal knowledge with you. True Crime readers will be shocked at how little they know about the Rich Kids of Beverly Hills being transformed into adept killers.  We all seem comfortable with our understanding why poor, disadvantaged young males become entangled in crime which occasionally leads to murder.  We accept the fact that it is their deprived upbringing with the lack of education coupled with the lack of opportunity that contributes to their anti-social behavior.

However, we have a problem trying to comprehend how young men who have gone to the best schools and have been given every chance to advance themselves end up as premeditated, heartless killers. How could all the trappings of success create such vicious murderers? We all would like to know the answer to this anomaly since it defies our understanding of human nature.

Joe Hunt the founder of the Billionaire Boys Club was brilliant, charismatic and a highly persuasive individual.  He proved to be one of the most intelligent and well organized killers who didn’t leave any detail to chance. This book goes behind his façade to show how the so called ‘Pied Piper of Beverly Hills’ was able to transform Rich Kids into mindless robot killers.

His story was made into a TV mini-series which was viewed by none other than Lyle and Erik Menendez. This TV program planted a seed in their minds as to how they could kill their father and mother and inherit millions from their parent’s estate.  During this time the brothers were taking advantage of higher education with Lyle at Princeton and Erik on his way to UCLA. Enjoying the lavishness of living in Beverly Hills, what more could they want?  What would drive them to murder?

Most readers are familiar with these Rich Kids’ stories, but no one has told the story from the prospective of what really happened. This book debunks the misinformation and lays out the actual story of what drove these Rich Kids to be killers.  The author takes you behind the scenes during the investigations and the intense courtroom drama to show what the public never knew about these killers.