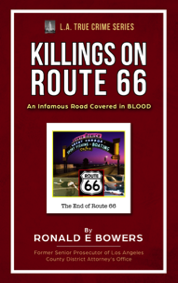 If Route 66 could talk it could tell so many fascinating stories especially all  the murders that occurred along its many by-ways. .We start our journey at the terminus of Route 66 at the famous Santa Monica Pier. There we review  a multiple murder case in which the killer was captured during a shootout that occurred on the morning of the Fourth of July. This intriguing case gives you, the reader, insight into the thoughts of a cold hearted killers.

While still in the shadow of the Santa Monica Pier, we discuss the killing of the German Tourist case which involved a shot that was heard around the world. You will learn why foreigners fear to visit the beach City of Santa Monica.  As time heals most wounds, we can’t leave this community without visiting the site where a 86 year old man drove through the barriers at the Farmer’s Market killing 10 and seriously injuring 63 shoppers. What should be done to this elderly gentleman who claimed to have experienced pedal error?  We examine the criminal and civil aspects which turned this community upside down as to what was just and a fair resolution of those cases.

We leave town on Santa Monica Boulevard, the original Route 66, and when we enter the City of Los Angeles we come to a street where a lady named Jean Orloff lived alone in her apartment.  She hadn’t been heard from so a neighbor checked out her place and found her dead on her bed.  When the Police and the Coroner check out the apartment they concluded that she died of natural causes and her body was sent to a mortuary for cremation. Since the paper work wasn’t signed properly a bureaucrat wouldn’t process the death certificate. As result a second Coroner’s investigator had to go out to the mortuary and re-examine Ms. Orloff’s body. What he found will surprise you.

We continue driving to West Hollywood where we veer off the old route to visit actress, Dominique Dunne’s, house where her obsessed boyfriend strangled her to death. During the trial her father Dominick Dunne felt that Justice wasn’t served so he became the most celebrated True Crime writer emphasizing victims’ rights. His crusade changed the way the media reports on murder trials.

Next we drive to Hollywood where we can’t ignore the most gruesome, gory, ghastly, and grotesque double homicide in which the victims’ bodies were cut open removing the heart and a head chopped off to be used as trophies. We then proceed a baseball game between the Dodgers vs. Giants. However, as the fans are leaving the Stadium shots are fired killing one of the Giants fans.  People wonder how safe are they attending sports event. As the public regained self-assurance it seemed like deja vu when another Giants fan was severely beaten as he was leaving the game.  We examine how safe is it to return to the ball park.

Next we come to a street that leads us to the site where Dr. Haing Ngor the actor in the The Killing Fields was murdered by three gang members who were trying to commit a robbery to get money for drugs.