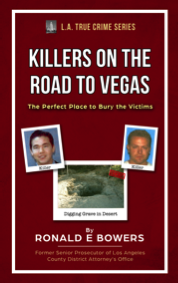 KILLERS ON THE ROAD TO VEGAS

This book illustrates the incredible love two mothers had for their sons who traveled to Los Angeles.  What makes this story so remarkable was the fact that the mothers lived in Israel.  Their sons stayed in constant contact with their mothers by daily phone calls. They had ventured to the states in hopes of becoming professional disc jockeys and making a new life for themselves.

Then one day the phone calls ceased and there was no communication.  The mothers immediately reached out to their son’s acquaintances in the states to locate them to see if something was wrong. The best information they were able to come up with was they were moving from Los Angeles to Las Vegas. If you were one of those mothers what would you do? Especially when you were in Israel on the other side of the world.  Call your local police to make a Missing Persons report? You contact your local police and you are told to file a report from where your sons disappeared from.

So you contact LAPD to make a Missing Persons report since they had lived there.  When you do, you are asked, what was their known address?  You indicate they were moving to Las Vegas.  You are instructed to contact the Las Vegas Metropolitan Police Department. You do, and they ask, “What proof do you have that they arrived in Vegas.”  You indicate you have none, so you are told that they can’t take a Missing Persons report under those conditions. The explanation given to you is that, in all likelihood, your sons just wanted to get away from you, their mothers.

The investigators had to find a blue roofed building, with an internet sign on top, which holds the key to finding the two young Israeli men.  This all unfolds on the main road from Los Angeles to Las Vegas where thousands of people travel to find Lady Luck.  You will also learn how a dog’s nose will uncover a big deep dark secret.

In order to add a little more intrigue to this story, we will visit Las Vegas to see how a brilliant criminal thinks up a plan to plant the victim’s car in Vegas.  In order deflect detection he leaves the keys in the car with the windows down while leaving cellphones and laptops in plain view on the front seat.  He goes about town using credit cards to leave a misleading path that the cops have to unravel.

The defense attorney catches the DA’s Office off guard and demands a speedy trial which means at the last minute another prosecutor has to be assigned his case.  This is a stunning strategic move by the defense knocks the prosecution off balance since there is enough time to prepare for trial.

The prosecutor accepts the challenge but the odds are stacked against her since the handsome defendant with his MBA is in a league all by himself. This book shows the hopeless situation faced by this prosecutor.   You will see how a female prosecutor and a female detective join together to see that justice is done for those two Israeli mothers.