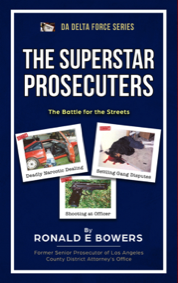 Elite groups have always stirred our imagination. We are aware of special units in our military such as Green Beret, Delta Force and more recently Seal Team 6. These exclusive troops are able to accomplice incredible feats because of their training and experience. However, what makes them extraordinary are the unique individuals who are selected to join their ranks.
The Los Angeles DA’s Office recognized years ago that they needed to have a special unit to handle the mega-publicity cases as well as the tough cases that the police bring them. As a result they created the DA’s Major Crimes Division to handle such cases. This Division was staffed by Superstar prosecutors who had demonstrated incredible skill and tenacity in litigating cases in court.
This book examines three of those special prosecutors so you, the reader, can see what makes them such extraordinary and effective attorneys in the courtroom. The first case we examine involved the shooting of two DEA agents during an undercover narcotic buy. The Ninth Circuit of Appeal decided to reverse the case 15 years after the conviction. What made this retrial so challenging was the fact that all the physical evidence had been destroyed by the court clerk’s office. The Major Crimes prosecutor had the awesome task of figuring out how to present a case in court without the original physical evidence.
Another case we examine in this book is about sibling rivalry that resulted in a double homicide. The Major Crime deputy had to build a case piece by piece by using corroboration.
The third homicide case we review involved the police using a 17 year old as an informant to do controlled buys from drug dealers. Unfortunately, the young man was killed by three drug dealers. The Major Crimes prosecutor had the delicate task of convincing the victim’s young girlfriend to testify against the three killers who were seated only a few feet away from her in the courtroom. The killers had shot this witness in the head and left her to die in a storm drain but fortunately she survived to tell her story.
We move on to the Silent Movie Theatre murder case in which the owner was gunned down in the ticket booth. The challenge for the Major Crime prosecutor was how to prosecute both the hitman and the person who hired him. This case revolved around convincing the jury that cell phone records revealed who was involved.
The last prosecutor we highlight was a remarkable trial attorney. He was like a stealth fighter jet in that he quietly went about assembling the evidence so it all pointed to the defendant. In one of these cases this prosecutor was able to convince a jury that gouging the victims eyes out was worthy of the Death Penalty.
In another case this prosecutor was physically attacked by the defendant at the end of a court session. However this personal attack didn’t deter this prosecutor from doing his job.
In the last case we discuss how this outstanding prosecutor was able to bring down an individual who drove around town looking to kill anybody of a certain race. Luckily, this amazing prosecutor was willing and able to construct a case that convicted the killer and as a result prevented a racial war.
This book focuses the spotlight on three astonishing prosecutors you, the reader, have never heard about. When you finish reading this book you most likely will say ‘thank God’ for the DA’s Major Crimes Division and its SUPERSTAR PROSECUTORS.