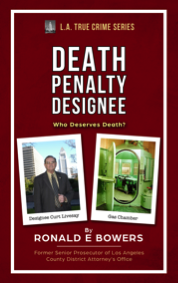 For many years the Los Angeles DA’s Office had assigned Curt Livesay to make the ultimate decision whether an accused murderer should receive the Death Penalty. This book relates Mr. Livesay’s thoughts on some of the most sensational cases that came across his desk.  He provides insight as to how the actual Death Penalty process worked and he uses specific cases to illustrate what were the aggravating factors that justified the maximum penalty of Death.

This book starts by reviewing the facts of the crimes committed by the convicted murderer, Tookie Williams. Mr. Livesay will give you a prospective of a firsthand account since he was there each step of the way.  Then the book discusses those killers who were described as the Worst of the Worst. In that category Mr. Livesay discusses the cases of Richard Ramirez, the Night Stalker, Lawrence Bittaker, the Tool Box Killer, Douglas Clark, Sunset Strip Slayer, and William Bonin, the Freeway Killer. These are the cases that the abolitionists of the Death Penalty have difficulty justifying Life in Prison without Parole for these abominable killers who so callously and viciously killed so many totally innocent people. The question is what should the punishment be for such heinous behavior?

Mr. Livesay continues to talk about such cases as the Wonderland Massacre, Cotton Club Revenge and explains why neither resulted in the Death Penalty although the facts justified it. Then he provides insight into some of the weirdest and wackiest cases he had to deal with which included Joe Hunt of the Billionaires Boy’s Club, the Crazy Dentist, Domino’s Pizza Killers, the Assassination of Turkish Consul General, as well as the infamous professor who was the Chainsaw Killer.

During the actual Penalty Phase of a murder trial, the prosecution has to prove that the Aggravating Factors substantially outweigh the Mitigating Factors for all jurors to agree on the Death Penalty. Mr. Livesay explains what weight he gave to the horrific facts of the crime itself and how much weight was given to the killers’ prior criminal record.

While reviewing the candidates for the Death Penalty, there appears to be an absence of Women. However, Mr. Livesay said that Women weren’t immune from receiving the ultimate punishment. He discusses the women from Los Angeles County who in some way or other earned the Death Penalty. In particular he discusses all the ladies from LA County who made it to Death Row which included Sandi Nieves, Maureen “Miki” McDermott, Elizabeth Thompson, and Mary Ellen Samuels.

He further provides insight as to why the DA’s Office didn’t seek the Death Penalty for Angelina Rodriguez who killed her husband by giving him Gatorade laced with anti-freeze and juice from the Oleander bushes. At first the DA’s Office had recommended Life Without Parole however this book reveals a certain fact that elevated this case to the maximum punishment.