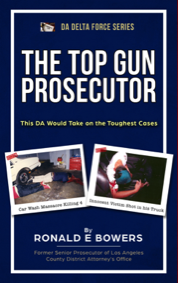 All large agencies have some type of elite group that is called upon to handle the toughest and sometimes delicate business. At the Los Angeles District Attorney’s Office that special group is designated the Major Crimes Division. When police detectives bring to the DA’s Office an extremely complex or high publicity new case, it may be diverted to this special Division. There it will be assigned to a special prosecutor who will prepare the case from start to finish.

Before I retired, I was a deputy for the DA’s Office for 43 years. My last assignment was the Head Deputy of the Trial Support Division and in that capacity I worked closely with the special members of the Major Crimes Division. My role was to assist them in preparing and presenting their cases to a jury. In that role I became familiar with the facts of their cases was well as got to know these extraordinary prosecutors.

What I noticed the most was the dedication they showed in trying to seek justice for the entire state of California. They were tenacious in building their cases on a solid foundation. What I admired most was how well they could handle unbelievable stress from months of litigation in front of a jury.

After writing over a dozen True Crime books, I heard from my readers that they wanted to know more about the so called big cases and how they are solved and what the attorneys went through in the courtroom. That was when I came up with the idea of selecting one of the top gun prosecutors in the Major Crimes Division and giving the reader a chance to review several of cases tried by that special prosecutor.

This new book The Top Gun Prosecutor follows the same format but this time it is prosecutor John Monaghan’s cases which are reviewed. Besides being a brilliant litigator he has developed incredible rapport with homicide detectives leading to unsolvable cases being solved.

When Prosecutor John walks into court he projects super confidence. However what sets him apart from other high power attorneys is the fact that he avoids publicity and prefers flying below the radar. He is willing to take on the toughest cases especially the ones that generate little if no news coverage.

I have worked with hundreds of first-rate attorneys but John Monaghan is in a league of his own. This book will shine the spotlight on six of his cases and you the reader will gain insight and appreciation at what a truly gifted prosecutor he is.  But most of all you will have the opportunity to go behind the scenes to see how some of the most violent and brutal murderers were brought to justice because of extraordinary efforts of the TOP GUN PROSECUTOR