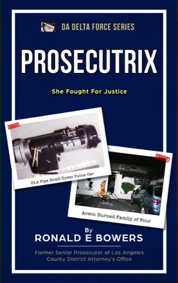 There are special elite group such as the Green Berets, Seal Team #6 or Delta Force that everyone has heard of. Also there are special groups in business, sports, or law enforcement. When it comes to the Los Angeles County District Attorney’s Office, there is a special group called the Major Crimes Division. After the debacle of the O. J. Simpson case, the DA’s Office decided to set a special division of elite prosecutors to handle the high publicity cases as well as the extraordinarily tough cases. Needlessly to say the attorneys assigned to this elite division are highly talented, and have acquired litigation experience from the myriad of jury trials they have handled.

That was when I came up with the title for this new book series as the DA Delta Force. This seemed to be an appropriate title since Major Crimes Division is definitely an elite group with many similarities to the infamous Delta Force. Both are made up of highly skilled professionals who are the best of the best in pursuing their mission. Members of both groups perform difficult assignments without any fanfare.

In this first book of this series titled, Prosecutrix– Fight for Justice, I selected prosecutor, Eleanor Hunter, to be our first subject. She was an incredible attorney while assigned to the Major Crimes Division where she took on some of the most difficult cases which includes the following:

This case involved the killing of a 2 year old boy in which the prosecutor had to admit the DA’s Office had prosecuted the wrong person. We explain the painstaking work it took to get the real killer convicted.

Eleanor took on this case that involved a defendant who had been a fugitive for over 25 years.   The facts were that the defendant had been  a SLA urban terrorist member planting bombs under two LAPD police cars. PEOPLE V. BRUCE KOKLICH

This case involved a couple who were in real estate in which the wife disappeared and her body was never found. The first trial ended in a hung jury and Eleanor had to find a way to convince the jury that the husband was the killer.

This defendant was a born con-artist and with her son had left behind a path of crime and murder all across the country. Eleanor had the patience to end the defendant’s evil ways.

This case involved a dispute over the use of an alley way behind two separate motels owned by two separate families from India.  We reveal how she was able to develop a case against the brothers.